I Meditated to Forgive My Cheating Boyfriend, Instead My Gut Went Haywire 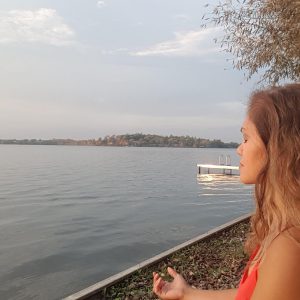 I heard Meditation was good for clearing your mind so I thought I could use it for forgiveness too.

I wanted to forgive him, I still loved him and I believed him when he told me that his affair was an elaborate scheme to get her to sign over the property that she was co-signed on during the tenure of their former relationship together.

He promised me he would do anything to get my trust back. His computer and his phone would be unlocked so could I look at it and check-in at any time. He even changed his phone number.

I discovered he had been cheating on me when he left his computer on. He told “her” that he was in Florida trying to start up a business with his best friends there and that’s why he couldn’t see her regularly. He had been seeing her one weekend a month for 3 months, and most of their contact was via email and I read them all. All the “I miss our cuddling” (what? He hated cuddling, he couldn’t fall asleep like that) he couldn’t “wait to ravage her body again”. All the while, I thought he was visiting his 19-year-old daughter Laura (name has been changed), at Michigan State University, where she was on an athletic scholarship, it was just a 4-hour drive away. I had asked him why he didn’t take me with him and he chastised me saying that he has a right to spend time alone with his daughter (even though she and I got along so well)

He agreed we could do a counseling session. An intensive weekend session based on the “Imago Theory”, the theory whereby one finds a partner based on their expectations or unfulfilled needs they had as a child. I thought maybe now I could understand, why he held me to such “high standards” why he wanted me to dress a certain way in front of friends and be the perfect hostess. (Apparently, his mother liked all these formalities too, and his Dad loved her for that.)

I had made a list of all the reasons why his “she”, was better than me. Highlighted the things I could improve and remained dismal at the things I could not change. I had a child and which naturally, comes with some freedom limitations of being a mother, I couldn’t party as much. I could get even more fit. She had way larger breast than I had. She was white, I was ethnic (shouldn’t I have one up being of the exotic nature?) No, she was white, and had blue eyes, how could I compete. Apparently she was a clean freak (like his mother), okay I guess I could be a little neater.

I stilled loved him. How do you stop loving someone overnight?  And he begged me to stay. And I was intent on forgiving him so I began meditating every day, two times a day, for an hour.

A month or so, went by and things were going really well, it was like we were dating again and he was pulling out all the stops. He was more romantic and attentive than ever. She did provide her signature and so he promptly put the sordid property up for sale. The tenants moved out with no issues and I helped him clean the place and get it ready for the market. It was in a prime location in the Beach area of Toronto and it sold quickly. The last night, before the new owners would take possession, we went out to a candlelight dinner downtown and he wanted to pass by there. He wanted to make love to me there on the last night that he would be the official owner. We thought it would a nice way to retire the evening, the final seal to end this phase of his life and be rid of this piece of property that could no longer bind him to “her”.

I also thought it was a sort of nice “fuck you” to her too.  I look back now and I think of my own character. That I would find this behavior acceptable –  that he had to forge being in love with her and have sex with her so she could sign over papers to him. I guess it was cheaper than offering her money. And don’t they do this kind of stuff on television shows all the time? You know, handsome real estate mogul, wines and dines a lonely businesswoman, and makes high stake deals in the bedrooms of fancy hotels, then discards her with a vengeful smirk after she signs over the paperwork?

This was the night a strange feeling in my body started. It was like a churning in my gut. The next day the churning grew stronger and moved up to my upper chest. I could not ignore it. Whenever he would go into the bathroom, I would check his phone, and I check his computer, no contact with her.

I start doubting myself. Maybe I couldn’t forgive him. Yet I knew that if I was to stay in this relationship I had to learn to forgive him, let it go and not be resentful towards him. Besides he would never put up with my resentment. He always had a great way of turning the spotlight back on me, shining a light on my own insecurities. He’s told me that I pressured him. I questioned myself — did I ask too much? We had been together for 2 years, we were not a “young couple” I was 36 and he was 14 years my senior having just turned 50. Shouldn’t we already know what we want in a relationship? Wasn’t 2 years of dating enough to know? Besides, it was his idea to move in together and get a cute condo near the subway line so that it would also make commuting easy for my 13-year-old daughter, and we wouldn’t have to worry about driving her around all the time!

So I closed my eyes tight, pulled the blanket up closer to my mouth so I could feel my breath against it, put on my earphones and meditated, focusing on my breath. Scanning my body and trying to let all my thoughts go….

When meditating, I would also do visualization work. I would bring up a vibrant picture in my head of the two of us together, visiting Florida, where his best friends lived. I could see the palm trees and the restaurant patios. But today and for the next 2 days, I could see nothing. Blank. I kept my eyes shut and tried again to bring up the picture, the colors, the warmth of the Florida sun and nothing. For the life of me, I couldn’t conjure up any pictures. My visuals came up black.  As my gut and chest churned.

On day 3, the churning was so strong in my body that it woke me up at 3 am. I took a peek in bed at him and he was fast asleep.

I quietly grabbed his phone and scrolled through the recent call list of the number dials and numbers received. I looked at the texts and there was nothing suspicious there what so ever.

And then I went to his computer, which was located in the den and opened up his email.

I scrolled through the Inbox folder, scrolled the Deleted items, of which there was quite a bit, he liked to keep a clean inbox (unlike me) but nothing out of the ordinary.

Then I went into the Sent items folder. And I scrolled down and down, all of today’s, all of the yesterdays, nothing and then upon the Sent items – 3 days ago, something caught my eye.

I saw his name attached to a brand new email. It seemed he had created a new email address that he had not given to me.

I had to get into that new email. I opened up a new window and went to Hotmail.com, I went to the Login and typed his new mail in the box. And now I needed the password.

I put my hands on the keyboard, closed my eyes, allowed myself to go into a meditative state, taking 3 long deep breath, after a few moments, my fingers typed in a 6 letter word. I hit enter.

I guessed the correct password, on the first try.

I looked at the inbox and there she was, he had begun contacting her 3 days ago. The thread of emails began with him apologizing to her and her being angry that she didn’t hear from him for a month.

I started shaking but it was more of a quick, vibrational feeling throughout my body, not the same as when I first found out. I realized the churning that I had started feeling 3 days ago was my body trying to tell me something, and this was it, this is what you call gut instinct. Intuition, something that never had before (or listened to before) obviously or maybe I wouldn’t keep finding myself in these horrible relationships with men.

I woke him up, woke him right the fuck out of the bed at 3:30 am in the morning and told him to get out. This time he didn’t argue, he quietly packed a big, duffle bag and started towards the door.

He stopped and turned back to me and looked at me, with some sadness in his golden-brown eyes. And said, “the next guy you date, try not to pressure him too much”

“You’ve got to be kidding me,” I screamed at him, “You are a fucking, pathological liar, you need to have your head checked out, and you need to get the fuck out now.” And that was it, it was over and I knew in my gut we were done.

I kept my meditation practice going, it would just be another 6 weeks and another feeling overwhelmed my body, this time it was the feeling of self-love. I began loving myself, accepting and forgiving myself. It was a crazy kind of love for me, that I had never experienced before.

It wasn’t too long after that, that I met my husband and fast forward today it’s been 11 years. I now teach the profound, sometimes unknown side effects of meditation, self-love and a sharpened intuition.

In this holistic, life coach program, we go to the root and re-discover your Core Essence. Transform your Inner World, to transform your Outer World.